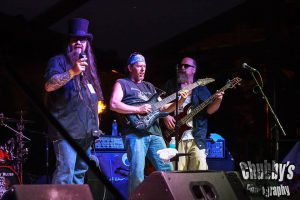 Bobby Blues Tortured Soul is a five-piece rock & blues band based in Wausau that does both originals and covers. We all started out in a classic rock cover band together, as a sideline we did blues and started performing as Bobby Blues in 2012. Our founder, Bobby “Blues” Pendelton is an avid lyricist and as a band we’re always working to put music to his works, we’re still in our early stages but are eager to make a name for ourselves. We currently do a mix of blues covers and originals along with popular rock and southern rock material done “Bobby Blues style” giving our fans a wide variety of music with our own twist. All of our shows have one goal, FUN! We like crowd participation and love to see people grooving on what we do. Formed as a trio in May of 2008, Aaron Williams (Vocals, Guitar), Eric Shackelford (drums, vocals) and Z (bass, vocals) have the blues deeply rooted in the music they love to play. The trio all met while Aaron was hosting a blues jam at the now-defunct Cuda Café. Not long after this fateful night, the band was playing all over their hometown of Madison, WI.

As word continued to spread beyond their hometown, the trio began to tour the Midwest playing sold-out shows in North Dakota, Illinois and Indiana. As the band continues to grow musically, they’ve fused blues, roots and rock music into and original sound that a growing fan base is recognizing and following. Steve V and The Knockouts serve up high-energy, post-war Chicago blues, Memphis-soul, and West-coast swing with the kind of polished, professional show that has become a lost art in today’s “blues” scene. B Steve and his band – featuring fellow MN blues hall of famer, Dan Schwalbe – have played alongside and backed up some of the biggest names in the biz – including James Cotton, Jonny Lang, The Blasters, Buddy Guy, Gary Primich, Bryan Lee, R.J. Mischo, and Hubert Sumlin, just to name a few. If you like Blues done right, do yourself a favor and check ’em out! Both Stevie and Bruce McCabe are Minnesota Blues Hall of Fame members. Bruce played with Lamont Cranston, The Hoopsnakes, and Johnny Lang in the past. Living on the road and playing clubs from “Austin to Boston,” the Bel Airs are carrying on the tradition of American rhythm and blues.  The band is fronted by brothers Dick and Dave Pruitt on bass and electric guitars.  Growing up on country soul and rock-n-roll, the Pruitt brothers have developed a harmony vocal style all their own.  They have been performing together for more than 30 years, wowing audiences nightly with their unique brand of music- leading one reviewer to refer to them as the “Everly Brothers of Blues.”

With four acclaimed albums and performances at festivals and night clubs across the USA as well as England, France, Belgium and Spain, the band continues to travel extensively.​ ​ The Bel Airs’ musical approach and superbly crafted showmanship make for a more than memorable concert whenever they appear.

These guys Rock the House with “Old School”, fill the dancefloor Rock N’ roll style Blues. Put on your dancin’ shoes and come on down for an entertainment blast from the past! Don’t try to snatch him back and hold him, he’s a man on the move. John Németh had already established himself among the very top ranks of blues musicians and modern soul singers when he decided to break the mold with his new record, FEELIN’ FREAKY. Németh fearlessly crushes all barriers of style and genre with an album of original songs that defies all the usual pigeonholes. Drawing from his strong influences in blues and R&B, as well as contemporary sounds in hip hop and rock & roll, John creates music that is personal as well as universal, and owes its origin to no one but John Németh. John’s songs are groove and melody-driven, laced with thoughtful lyrics and nuanced humor, and cover themes from social issues of gun violence and class values to the pure hedonistic joy of dancing, sexuality and marijuana. He creates his songs from melodies and phrases he draws from the sounds of life, from early-morning Memphis songbirds to the din of the city. For this album John brought his new songs to his great touring band, the Blue Dreamers – Danny Banks on drums, Matthew Wilson on bass and guitar, and Johnny Rhodes on guitar – so they could hone the groove and finish building the album as a group. The award-winning, hard-touring, guitar slinger and singer Ana Popovic is back on the road promoting her new album ‘Like It On Top’, that focuses on empowered, successful, inspiring female role models.

Like It On Top opened #2 at the iTunes most downloaded US blues albums. The album peaked at #2 of the Billboard Top Selling blues albums chart. Recorded in Nashville, TN and produced by four-time Grammy winner Keb’ Mo’, the blues influenced album features guest appearances from Kenny Wayne Shepherd, Robben Ford and Keb’ Mo’.

A trending theme in today’s world is women overcoming obstacles and breaking through the glass ceilings to reach the top. Like It On Top celebrates those that take initiative, develop, inspire and motivate. But it also credits the men who are motivated and enlightened enough to support women in their quest to be their best versions of themselves.

“I hope that my music inspires others to motivate ladies all over the world to be successful, energetic, empowered women on a mission, and to motivate men to give them that chance,” Popovic says. “The majority of women need to work harder than men to prove themselves or need to cope with a feeling of constant pressure to never make a mistake and be perfect. I believe that women no longer only have the right to earn a living and to take care of themselves and their families. The time has come to step it up. Becoming the outstanding leaders of tomorrow. Corner-office ladies in business, politics, and the electric guitar!”